Three earthquakes have struck in north-east Victoria, with tremors felt across the state, New South Wales, Canberra and as far as Adelaide and Launceston.

One earthquake was a magnitude-5.9 and there are reports of damage to buildings in Melbourne. The biggest earthquake in more than 50 years to impact a significant population centre in Australia has rocked residents in Melbourne and several other cities, with aftershocks potentially being felt for months.

It was larger in magnitude to an earthquake which devastated the city of Newcastle, north of Sydney, in 1989, which was a magnitude 5.6.

Professor Chris Elders of Curtin University’s School of Earth and Planetary Sciences said it has been more than 50 years since such a large earthquake had hit a significant population centre – when one hit Meckering, Western Australia, 130km east of Perth, in October 1968. The 6.5 magnitude quake caused around $2 million worth of damage and injured about 20 people. 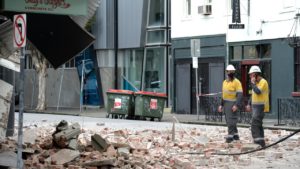