La Palma: A volcano erupted on La Palma in the Spanish Canary Islands on Sunday, sending jets of lava and a plume of smoke and ash into the air and streaming in rivers towards houses in two villages from the Cumbre Vieja national park in the south of the island.

Authorities had begun evacuating some farm animals from surrounding villages before the eruption at 3.15pm local time on a wooded slope in the sparsely populated Cabeza de Vaca area. 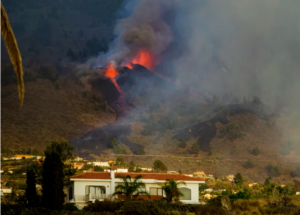 Two hours later, rivers of lava edging down the hillside, the municipality issued a mandatory evacuation order for four villages, including El Paso and Los Llanos de Aridane. Soldiers were deployed to help. Residents were asked to keep mobile phone use to a minimum.

After nightfall, video footage showed fountains of lava shooting hundreds of metres into the sky, and at least three incandescent orange rivers of molten rock pouring down the hill, tearing gashes into woods and farmland, and spreading as they reached lower ground.

“When the volcano erupted today, I was scared. For journalists it is something spectacular, for us it is a tragedy. I think the lava has reached some relatives’ houses,” local resident Isabel Fuentes, 55, told Spanish television TVE.

“I was five years old when the volcano last erupted (in 1971). You never get over a volcanic eruption.”

La Palma, with a population of 85,000, is one of eight islands in Spain’s Canary Islands archipelago off Africa’s western coast. At their nearest point, they are 100 kilometres from Morocco.