An M1.6 Solar Flare peaked yesterday at 06:38 UTC. Source of the eruption was sunspot region 2882 which was in an earth-facing position at the time. Type II and IV radio sweeps were observed which suggested straight away that the event should be eruptive and thus launch a coronal mass ejection towards Earth. When coronagraph imagery became available, it became quickly obvious that the solar flare indeed launched a coronal mass ejection towards our planet. 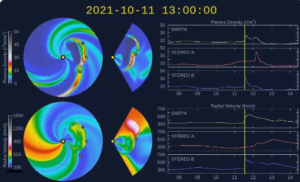