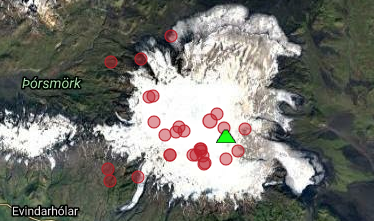 Iceland’s Katla is one of the world’s most powerful volcanoes showing signs of unrest.

The home of the Katla volcano is Mýrdalsjökull glacier, the southernmost glacier in Iceland, almost 600 km2 large, and the 4th biggest glacier in Iceland. Myrdalsjokull´s ice cap hides the Katla caldera. Katla erupted very powerfully in 1918 but there has been evidence of smaller eruptions since then. Icelandic volcanologists are expecting another eruption in the next few years, so Myrdalsjokull and the Katla caldera are being monitored quite closely.

Katla volcano is subglacial, basaltic-to–rhyolitic, and it has the reputation of being one of the most dangerous volcanoes of Iceland. Since the Laki craters and the Eldgjá (Eldgja) fissure system are part of the same volcanic system, Katla can be regarded as one of the most powerful volcanoes in the world.

Katla is about 30 km in diameter with a crater of 10 km in diameter. The volcano´s highest part reaches 1512 m above sea level. Within Katla caldera, situated beneath the centre of Myrdalsjokull, the ice is hundreds of metres thick.

Over the last two weeks, Katla volcano was shaken by 1 quake of magnitude 4.4 and 7 quakes between 2.0 and 3.0. There were also 72 earthquakes registered below magnitude 2.0 gives an indication that Katla maybe showing signs of volcanic unrest and magma moving under the caldera. 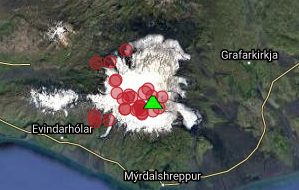