A powerful earthquake, the second in just over two weeks, has rocked Crete, prompting “a small tsunami” in the south of the Greek island and an evacuation alert.

The quake, which was felt as far away as Cyprus in the eastern Mediterranean, had a magnitude of 6.4, according to the Geodynamic Institute in Athens. There were no immediate reports of casualties or injuries although rockslides were widespread.

An hour after the underwater quake hit at 12:24pm local time, the Greek seismologist Gerassimos Papadopoulos released a graph depicting a tsunami off the island’s southern shores.

“A small tsunami is under way in southern Crete,” he wrote. “Keep away from coastal.”

The quake was followed by aftershocks of 4.1 and 4.5 magnitude. Experts said the force of the quake – recorded at a sea depth of 2km, 14 miles east of the village of Zakros in eastern Crete – was intensified by its shallowness. Footage uploaded on social media showed people rushing out of their homes, office buildings and shops as it struck, with locals saying it jolted the island for at least 20 seconds. 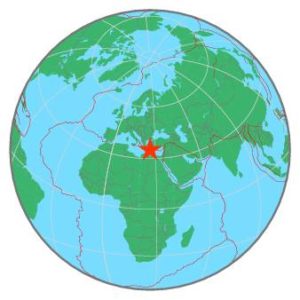