A strong seismic crisis has been occurring on the Reykjanes peninsula near Fagradalsfjall mountain since mid Feb 2021, involving several magnitude 5+ and thousands of smaller ones. Volcanic tremor has appeared recently as well, indicating that magma movements underneath are likely accompanying and/or causing the seismic swarm. A new eruption in the area started on 19 March 2021 evening.

The University of Iceland’s Institute of Earth Sciences reported a summary of eruption parameters today documented since 26 June. Parameters showed lava area, lava volume, lava flow discharge rate, rock geochemistry, and volcanic gases. The graph below depicts an overview of the results.
The current eruption’s site activity changed at the end of June as it began to fluctuate a lot in the frequency of lava flow discharge rate’s periods. Following measurements depict a decreasing level of the lava flow.

Lava flow volume
Scientists estimate that approximately 96,1 million cubic meters of the lava have so far erupted from all vents. The lava flow has mostly accumulated in the Meradalir valley. No lava flows occurred in Geldingadalur, Nátthaga, and Syðri Meradalir valleys over the past two weeks. 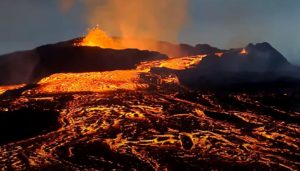