An Earth-Facing filament eruption released from the Sun May 9th has sent a Coronal Mass Ejection impacting Earth’s magnetic earlier today. Earth’s magnetic field is still reverberating from a CME impact during the early hours of May 12th. The solar storm cloud struck at approximately 06:30 UTC, setting the stage for a very strong geomagnetic storm. At its peak, the disturbance registered G3 on NOAA Storm Scales, making it the strongest geomagnetic storm of Solar Cycle 25. 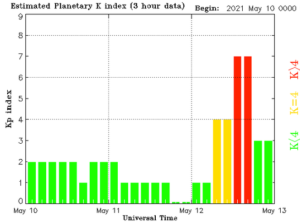 The Bz component of the interplanetary magnetic field (IMF) tipped sharply south following the CME passage. This has opened up the door for the solar wind to freely interact with our geomagnetic field. A Strong G3 storm threshold has been reached and there should be Visible aurora at middle to high latitudes.