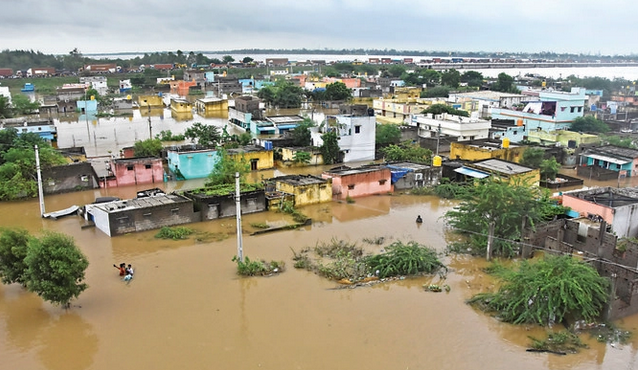 NEW DELHI: Dozens of people were reported dead or missing on Saturday after heavy rainfall and flash floods hit the southern Indian state of Andhra Pradesh. Environmentalists say deforestation and excessive development are exacerbating the effects of extreme weather driven by climate change.
Local media reports said tens of thousands of people were evacuated to makeshift shelters in Chittoor, Kadapa, Nellore and Anantapur districts in the state’s southern Rayalaseema region that have been hit by intense torrents since Thursday.
At least 17 people were confirmed dead and more than 100 are missing. Navy personnel and seven teams of the National Disaster Response Force and the State Disaster Response Force have been deployed in rescue operations.
A DRF spokesperson said three districts, Chittoor, Tirupati and Kadapa, were severely hit. More than 100 villages in the Kadapa district are under water.
“Very heavy rainfall in the range of 180 to 200 millimeters took place in the affected areas within 24 hours,” R. K. Jenamani of the Indian Meteorological Department said.
“The severity of rainfall is increasing but at the same time there is no place for water to escape.”
Himanshu Thakkar, who studies rainfall patterns in India, said that whether rainfall will turn into disaster or not is “majorly influenced by the way we are dealing with the river basins, the catchments.”
“There is an increasing degradation of catchment and deforestation is happening. The local water system which used to help harvest the rain and recharge ground water — those systems are getting systematically degraded,” the Delhi-based environmentalist at South Asia Network on Dams, Rivers and People said. He added it was unfortunate that despite authorities’ forecasts for Andhra Pradesh the disaster took place.
“The Rayalaseema region of Andhra Pradesh is one of the driest areas of India,” Thakkar said. Had we prepared, this rainfall could have been a boon.”
Flooding in Andhra Pradesh comes after extreme weather disrupted life and caused heavy damage in another South Indian state.
Activities in Chennai, the capital of Tamil Nadu, were brought to a halt earlier this week after heavy rainfall and floods. Environmentalists say that while rainfall frequency has been disrupted by climate change, what aggravates its effects, leading to huge damage in the region, is rampant development. Environmentalist Nityanand Jayaraman, who works in Chennai, said “growth and development have destabilized the environment and degraded the land.”
“What we call development is the degradation of land,” he said.
“Earlier the total rainfall used to be spread over a number of days, whereas now the number of rainy days has shrunk. Earlier there used to be 30 to 35 days of rain but now it has shrunk to 10 to 15 days in the entire northeast monsoon.
This is one difference because of mainly climate change,” said Prof. S. Janakarajan of the Madras Institute of Development Studies in Chennai.
The crisis, however, is due to the region’s growing population density.
“In 2011, there used to be 26,000 people per square kilometer, now there is easily 35,000 to 36,000 people per square kilometer. When the population density is going up, per capita drain space is declining and causes flood.”
He added that the “way out” of the flood situation is the “retrieval of micro drains and rivers and the reduction of population density.”